Ever since Dungeons and Dragons created a niche for long-term cooperative gaming, players have been looking for additional worlds in which to spend even more time. Warhammer has become perhaps the biggest universe to come along.

Thirty plus years of ever-expanding worlds and creative play make Warhammer a 2018 inductee of the Pop Culture Hall of Fame.

The Warhammer series of tabletop games started in the 1980s emphasizing thoughtful, cooperative team play over competition. (Despite the term “cooperative,” player are ultimately competing with each other). The series has gone from the original Warhammer Fantasy Battle’s Earth-like setting to the more recent Warhammer 40,000, with its futuristic, planet-hopping storyline. Even that last one has been around for thirty years now, debuting in 1987. Warhammer 40,000 has also spawned a series of video games that play off of the same themes. 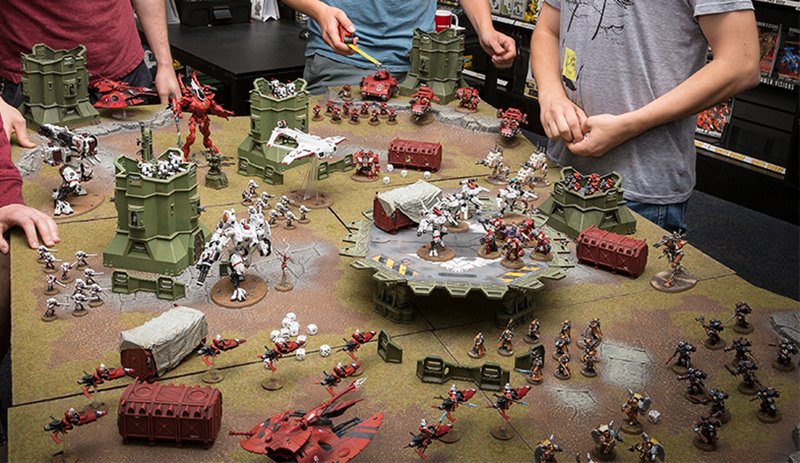 In addition to maps that were constructed ahead of time, Warhammer relied on card play to help randomize the action and adventure. The game came to life through miniature figures. In fact, many players consider Warhammer to be a hobby more than a game. Decorating the figures and even creating landscaped tabletops consumes even more time than actual gameplay for many participants.

Warhammer Quest was primarily written by Andy Jones. Warhammer Quest was designed as a four-player game of exploration and battles. The main Warriors were a Barbarian, And Elf, a Dwarf, and a Wizard, each with different capabilities and strengths.

As the game grew and evolved, the cards and figures became collectibles unto themselves. When new universes were released, older ones continued to be updated and supported, so players could have several different adventures going at a time.