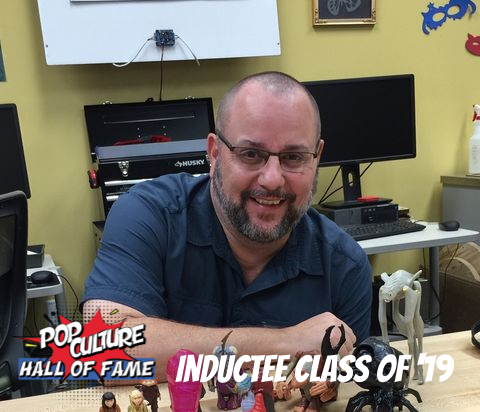 Nostalgia is a funny thing. Sometimes, we yearn for a period of time-based only on a few good experiences, while ignoring a lot of mediocre ones. Folks who collect Kenner Star Wars Toys, or retro games might talk about “golden ages”, while ignoring things like the E.T. game. Folks, that is, who aren’t Blake Wright.

Wright doesn’t focus on greatest hits. With his books, The Toys that Time Forgot, Vol. 1 and 2, Wright catalogs those ignored but interesting toys and stories that failed or never came to fruition, shedding light on the toy-making process and sparking the imagination about what could have been. For that digging, dedication and hard work, we’re Inducting Blake Wright into the PCHOF Inductee Class of 2019.

Blake, with decades of writing experience as an energy reporter based in Houston, began a publication and toy store in the early 2000’s with his wife. The store, LittlePlasticMen, helped fuel an interest in the kinds of toys we don’t hear about.

Enter Kickstarter. With the idea, goal and layout firmly in place, Wright took to the ever-popular crowd-funding site to make The Toys that Time Forgot a reality. When all was said and done, more than 500 backers helped Wright exceed his goal of $30,000 by nearly a third, and make the book a reality, with more than 200 pages examining 20 toy lines.

The campaign was so successful that this year, Blake raised another $40,000 and published Vol 2, with another 200 pages and 20 toy lines. With all that hard work, Wright has helped us remember these forgotten toys a bit better and we’re happy to induct him into the Pop Culture Hall of Fame.