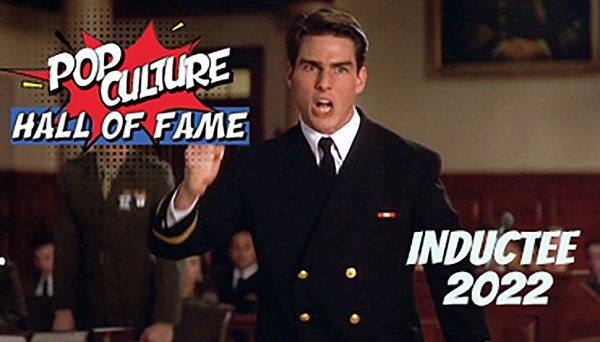 Even though Tom Cruise first appeared in movies in 1981, it only took a couple of years before his role in Risky Business set him on the course to be a must-see movie star. His run of major roles over the next decade would elevate him to legendary status. And he just keeps going. His versatile, entertaining longevity makes him worthy of a spot in the Pop Culture Hall of Fame as an Actor for 2022.

The fact that he looks preternaturally young certainly helps his appeal a bit. But he can flash that killer smile and then turn grim on a dime and sells every bit of it. Some critics may have rolled their eyes a bit at movies like Cocktail or Days of Thunder, but fans didn’t care. Not every crowd-pleasing blockbuster has to be a prestige film. And no matter how serious or silly the role, Cruise always gives it everything he’s got.

He also has the star power to prop up an action franchise or two. Somehow he has managed to anchor the Mission: Impossible franchise for over 25 years, often doing his own stunts. The next installment in the series will happen when Cruise says “hey, let’s make a movie!”

Top Gun is now a franchise, right? The eternal wait for the sequel to the 1985 original suggested the idea should be best laid to rest. But they finally pushed through and made it, in no small part due to his influence. The action-packed blockbuster paid off handsomely for everyone, critics and fans alike. Why should anyone doubt Tom Cruise again?

His dramatic roles can be equally iconic: A Few Good Men, The Firm, Rain Man, and others are infinitely quotable and meme-able. He’s even willing to play the bad guy occasionally, as in Collateral.

Even when he makes a surprise cameo as in the third Austin Powers movie or Tropic Thunder, he steals the show. In fact, there is talk of a standalone film for Les Grossman, the bonkers crazy film producer character he played in Tropic Thunder.

If he hasn’t appeared in as many films over the last few years, it’s certainly not because nobody wants to see him or work with him. He works when he wants to, and Top Gun: Maverick’s billion-dollar intake proves that. For that enduring appeal over the last 40 years, Tom Cruise is inducted into the Pop Culture Hall of Fame for 2022.