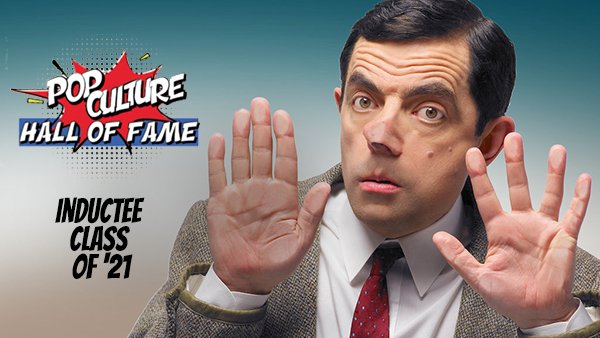 Pop culture often embraces low-brow entertainment over sophisticated, serious concepts. Those who understand the power of that distinction can lead lives of gloriously silly success. Rowan Atkinson, best known as Mr. Bean, has run with that idea most of his career, and for that, he is an inductee in the Pop Culture Hall of Fame for 2021 in the Actor category.

Mr. Bean is sometimes compared to Pee-Wee Herman (which is fair and, quite frankly, a compliment to both) but one can argue the character shares a lot more with classic physical comic performers like Charlie Chaplin and Buster Keaton. The often wordless performances by Atkinson can leave audiences, well, speechless when they are not laughing hysterically.

His comedy often stems from acting increasingly silly while he thinks no one is watching, showing only modest embarrassment when he realizes otherwise. Through a live-action TV show, a long-running animated series, and a few films, Atkinson has had the luxury of stretching a bit for as long as he wants to.

It’s hard to believe the Mr. Bean character has only been around since 1990 because the whole shtick feels like classic British comedy from a couple of decades earlier. In fact, some of Atkinson’s earliest television roles were alongside members of Monty Python, including Blackadder and The Secret Policeman’s Ball. Maybe that’s why there is a gritty, low-budget feel to Mr. Bean’s vignettes and sketches. The absurdity was obviously contagious as well.

Of course, there is more to this actor than one silly character. Atkinson has appeared in a James Bond film (Never Say Never Again) and a Bond spoof (Johnny English). He has branched out to live dramatic theater, to wide acclaim. He’ll also be appearing in the new Willy Wonka movie, which could go either way.

His British pedigree involved driving a Mini Cooper in character and a McLaren F1 in real life. Working hard at being ridiculous has its rewards. For his neverending ability to entertain an audience, Rowan Atkinson deserves his spot in the Pop Culture Hall of Fame.