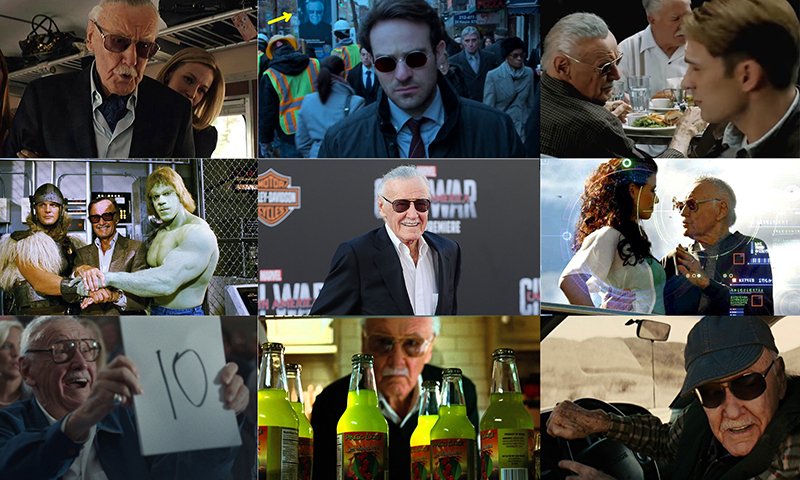 Legendary film director Alfred Hitchcock is known for many things – slow-burning suspense, frantic set pieces, witty repartee between characters. But one of his enduring trademarks is how he showed up in his own movies. Hitchcock appeared in 39 of his 52 movies in various guises.

In 1927’s “The Lady Vanishes,” he’s just an anonymous head in a crowd. In 1954’s “Rear Window,” he is seen through binoculars attending a party in a penthouse across the courtyard. His most ingenious cameo is perhaps in 1944’s “Lifeboat,” where he is only seen… well, see if you can spot him in the photo here.

John Ratzenberger is another Hollywood figure known for frequent appearances in a certain range of movies. Since 1995’s “Toy Story,” Ratzenberger (aka Cliff the Mailman from “Cheers”) has voiced a character in every single Pixar theatrical release. Some of these roles are fairly straight up versions of his own voice, such as Mack the truck in the “Cars” movies. A few, such as a French waiter in “Ratatouille,” are brief and barely recognizable. His cameo near the end of “The Incredibles” has fueled suggestions that his character may be a pivotal villain in the upcoming sequel.

There’s long been speculation that Pixar has a recording of Ratzenberger reading every word in the dictionary so they can piece together any possible line of dialogue to keep the streak alive long after he is gone.

Stan Lee (Pop Culture Hall of Fame 2015) is another frequent contributor to his own movies, showing up in most Marvel cinematic adaptations. Believe it or not, his earliest appearance goes back to 1989 with “Trial of the Incredible Hulk.” He shows up as a member of the jury in this largely forgotten made-for-TV movie. (And yes, he appears in many of the Marvel TV shows as well!)

But the modern streak began with 2000’s “X-Men,” which predates the current Marvel Cinematic Universe. He was a background hot dog vendor, something you could blink and miss. Same for his stirring role as “Man at Fair” in 2002’s “Spider-Man.” Both movies were made while Marvel had let the rights to those characters lapse to Sony. So even though he was the guy who basically built Marvel, Marvel was a long way from becoming the juggernaut is it today.

It took awhile before Marvel Studios figured out how to make compellling, action-packed blockbusters, but they really kicked it into gear with 2008’s “Iron Man.” (On one hand, has it really been a whole decade since Robert Downey, Jr. put on the metal suit? On the other, how is it possilble for Mavel to crank out so many memorable blockbusters in only 10 years?) Lee appeared as Hugh Hefner, possibly the only man having more fun on this earth than him.

The earliest MCU cameos were fairly non-obtrusive, in some cases easy to miss if you weren’t watching for it, But his roles increasingly have become more, well, roles. In Deadpool, he appears as a DJ in a strip club, an appearance you have to notice. By the time “Guardians of the Galaxy Vol. 2” hit theaters, he had several seconds in his own universe as himself, appearing in not one, but two windows during the film.

Including 2018’s “Black Panther,” he’s made well over 30 cameos. If you don’t have time to watch all of the MCU (and beyond) movies, here’s a clip of most of his appearances.

It’s hard to decide whether a subtle background appearance or a grand-standing speaking part is more fun for the moviegoer. A well-timed cameo can provide a bit of comic relief in an otherwise tense scene, so regardless of the extent of his appearances, Stan Lee makes Marvel movies memorable in more ways than one. Excelsior!