Put down your Pop!s, look away from Pop Price Guide for a minute and think about something: Where do these things come from? Most of us know about Funko, the company behind these immensely popular vinyl figures, and many more. What most of us might not know is the true-blue nerd and talented artist behind many of Funko’s creations (and more really cool collectibles): Reis O’Brien. 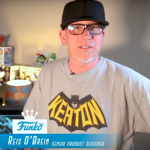 O’Brien’s trajectory into toys started early, as a science fiction fan and collector, he began buying, customizing and selling at conventions early on. After graduating with a focus on design, O’Brien began collaborating with Mike Becker, the original founder of Funko, at a clothing company with a side-project involving toys. After O’Brien volunteered to be “the toy guy” and work on Becker’s toy project, Mixo, it was eventually bought by Funko and O’Brien came on board as a designer.

With the connection established, O’Brien began working his design magic for the company. From sketch, to digital design and all the way to the finished product,

Reis leads and collaborates on a range of Funko projects, including Pop!s and others. Having honed his skills even further, O’Brien then started his own toy company, Bimtoy, launching the popular (and undeniably adorable) Tiny Ghost figure, creating a toy line all his own.

O’Brien continues to collect toys (especially Star Wars) as he has for more than 30 years. He’s also written about toys for publications including The Spruce Crafts, and enjoys a large following of fans eagerly awaiting his next creations.  With so much sway in the world of today’s popular toys, we’re thrilled to welcome Reis O’Brien as an inductee in the Class of 2019.