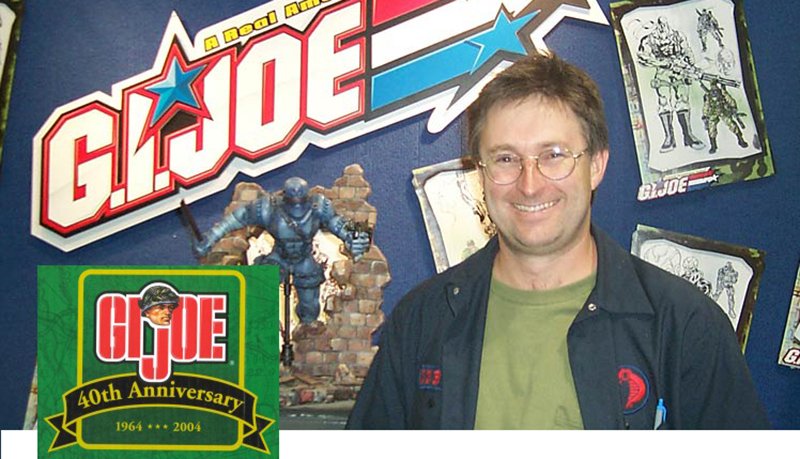 Collectors envy someone who works in the toy industry for having what must be a dream job. Derryl DePriest was able to take his childhood love of G.I. Joe toys and turn it into a career. As Vice President of Global Brand Management of Hasbro, and previously at Midway Games, he has been in charge of many of the biggest names in the toy and game business, but it was Joe that got him into the business. And also into the Pop Culture Hall of Fame.

When he was a kid, he had acquired about “75 to 100” G.I. Joes. “I didn’t come from a wealthy family by any means,” he said of the rather large collection. “Instead, I came from a family where we had a regular stand at a flea market, and my parents routinely bought and sold things on the weekends.” His two brothers were also obsessed with everything Joe.

“My brothers and I would look through the Sears catalogs. We had three different colors of pens and each of us would circle what we wanted,” he said. “I remember when the Mobile Support Vehicle and the Headquarters came out. All three of us had drawn big circles around them. Under the Christmas tree that year, we got THREE of each toy, because we couldn’t share, we were all jealous of each other.”

Continuing his lifetime fandom, DePriest is the author of “The Collectible G.I. Joe—An Official Guide To His Action-Packed World.” It’s widely considered THE deifnitive guide to vintage G.I. Joe and accessories.

Shortly after the book came out in 1998, Hasbro announced they were closing the old Kenner offices in Cincinnatti and moving the corporate jobs to Rhode Island. One employee who didn’t want to relocate happened to Director of Marketing for the G.I. Joe line. “I interviewed with the President of Hasbro. A few days later they offered me the job and I told my wife we were moving to Pawtucket. I had joined Hasbro as the director—heading up G.I. Joe!”

One of his early efforts was reviving the larger action figures for a 40th anniversary line in 2004. Hasbro produced a set of 24 figures in special retro packaging, and fans helped create outfits two more the Green Beret and Air Force Dress set. He is a regular attendee at JoeCon, the annual convention for fans of the brand, where he is regarded as a hero.

As popular as the anniversary dolls were, they were more of a niche product for collectors, so they were the end of the line at the time for the brand. DePriest moved over to the “Star Wars” division of Hasbro, which shows no signs of slowing down.