We recently spoke to Ron Rudat about what he has been up to.  While he has started doing paintings of New England like this one (more on that on his website here)  –

… he has always like the World of G.I. Joe.  This picture taking due diligence way back is one of his favs  –

has also remained actively involved in the G.I. Joe scene.  Ron has been asked to do drawings of many of the 1980s figures (he worked on the range between 1982 and 1987).

As he is now retired Ron also recently started to visit Cons as a great way to meet fans.  In 2017 it started with HasCon  –

In 2018 he went to three and for 2019 he and his wife will be attending six conventions, here the next four  – 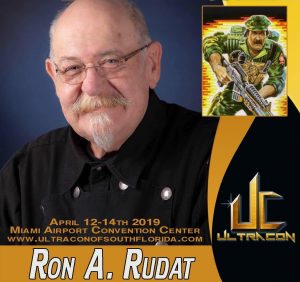 That being said Ron says he gets floored when anybody calls him a Celebrity – as Ron puts it “I’m just average guy who had a chance to work on a toy line that went beyond our dreams.”  That is probably why he resonates so well with collectors of Joe, he is one of them in a sense.