Doctor Emmett Brown, the eccentric and determined scientist at the heart of Robert Zemeckis’ Back to the Future, proudly declared “you’re gonna see some serious s***t” when his DeLorean-based time machine reached enough speed to time travel. He wasn’t kidding. Played by Christopher Lloyd, the frizzy-haired, lab coat wearing Doc Brown helped launch Back to the Future into our minds as some of the best sci-fi of the decade. For that and his other contributions to our ever-enduring nostalgia, we’re happy to welcome Christopher Lloyd into the Pop Culture Hall of Fame Inductee Class of 2019.

Doc Brown and his DeLorean have spread all over the world as figures, toys and collectibles, including Hot Wheels, Funko Pop!s, and even some pretty neat cosplays. Though perhaps the most enduring, Doc Brown was certainly not Lloyd’s only imprint on pop culture. 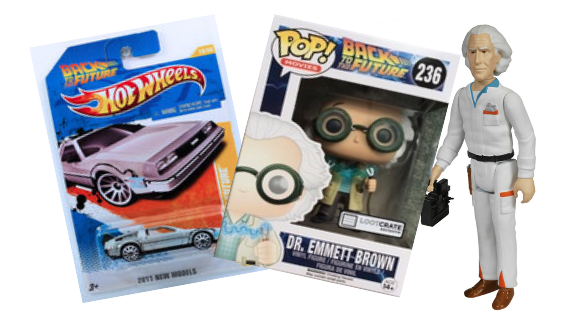 Judge Doom, the half-human, half-toon villain at the heart of Who Framed Roger Rabbit, had a presence that not even a steam roller could squash, and continues to terrify as a legendary figure as its own.

Lloyd’s indelible impact was also felt across other memorable franchises of the 80’s and 90’s, including the Clue movie, Star Trek,  the Addams Family, The Pagemaster and so many more. Most, if not all of these can still be found as video games, figures, and collectibles.  In a time when nostalgia for the 80’s and 90’s runs high (Do you even have a sci-fi movie in the 2010’s without a Back to the Future reference?) it’s impossible to look back fondly on the culture of these incredible decades in media without recognizing Christopher Lloyd’s impact. Welcome to the Hall, Christopher!