Preacher, The Punisher, The Boys…all legendary comic series, all known for their modesty-free portrayal of their central characters, dark humor and gritty action. All have attracted legions of fans and some big-budget deals and much of what fans see in these beloved series comes from the mind of one man: Garth Ennis. For his talent, prolific work and undeniable flair present in his work, we’re Including Garth Ennis in the Pop Culture Hall of Fame Class of 2019. 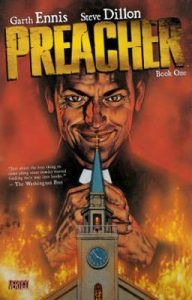 From a small town near Belfast, Garth Ennis avidly read the latest comics, mostly from the UK. In these early years, the comics Ennis read were vastly different from much of what was being published in the U.S., giving Ennis a unique view on comics and super hero culture and a different story to tell. Ennis’ first work, Troubled Souls, was firmly rooted in his upbringing, following a character through the conflict between Ireland, Northern Ireland and the UK now known as “The Troubles”.

His Break came when Troubled Souls parent publication, 2000 AD, brought him on board the well-known series Judge Dredd. Ennis’ assumed control directly from the series’ creator, creating several new issues for the character.

Soon after, Ennis worked on titles for DC Comics, where he eventually worked with Steve Dillion to co-create his signature work, Preacher. In Preacher, we follow Jesse Custer, a possessed preacher on a search for a God who abandoned his creation and Heaven. With it’s darkly humorous reversal of religious teachings in a Western setting, Preacher became a celebrated series later recreated for AMC TV.

His talent firmly established, Ennis’ was also a main creative force behind two now well known franchises that began as comics: Hitman and The Punisher. Although harboring a widely-known disdain for American-style superheroes, Ennis’ worked with arch-superhero creator Marvel, creating more issues of the Punisher and expanding upon its story. One of Ennis’ newest creations, The Boys, has also been adapted to TV, appearing on Amazon Prime. With his undeniable talent, unique vision of heroes and villains, plus his towering influence, we’re happy to have Garth Ennis in the PCHOF class of ’19.