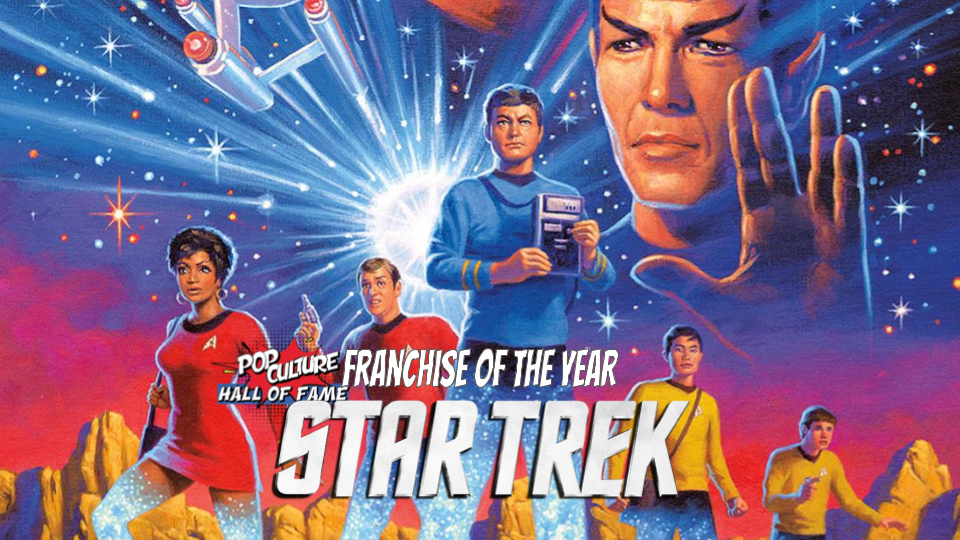 Live long and Prosper: The famous Vulcan salute, peppered throughout the series Star Trek has arguably come to define it.  Despite early uncertainty, Star Trek has grown to become a legendary franchise in the world of science fiction, with it’s hopeful, exploratory story providing not just a new and unique form of space-fairing entertainment, but also in many ways helping to give birth to modern fan culture. Though Star Trek’s rise to pop culture legend wasn’t always a smooth trajectory (certainly not as easy as entering Warp), its dedicated fanbase, huge imagination and memorable characters have helped the series to boldly go where none had gone before.

In the mid 60’s, Retired air force pilot-turned-television-writer Gene Roddenberry had an idea for a space adventure series full of discovery, principal and far reaching ideas. His creation would showcase a Utopian future, where society has surpassed race or class-based distinctions, which lead to a real-world cast that was unprecedentedly diverse for the time. Despite the politics of the ongoing Cold War, this future humanity lived and explored under a single, (mostly) peaceful government. After a few networks passed,  NBC picked up the idea, and soon Star Trek, along with it’s signature ship The USS Enterprise was introduced to millions around the US. Fans were treated to advanced effects for the time and solid acting at the hands of future legends Leonard Nimoy and William Shatner.

It’s the 23rd century. mankind has become a space-faring species after re-emerging from a nearly catastrophic WWIII. From our base on earth, Starfleet, part of the Federation government of settled worlds, sends explorers to chart the unknown, not to conquer, but to learn.

Imagine that concept in the 60’s, when a contemporary, swashbuckling hero may have settled huge conflicts at the end of a gun. Star Trek’s original series introduced so many concepts into science fiction, it’s hard to watch any today that doesn’t pull heavily from its ideas. Despite this, or perhaps because Star Trek was so ahead-of-its-time, ratings for the original series began waning after the show’s third year. The network threatened to cancel the fledgling series, but Star Trek fans,  in a prophetic move that would foreshadow the dominance of fan culture, wrote so many letters that the network kept the show around for another season before finally giving in to ratings pressure.

The fans had clearly spoken though, and demand eventually grew for Star Trek’s return. After a somewhat successful animated series, Star Trek re-emerged in the 80’s with more tech, more star-power and more effects to tell it’s unique story. The Next Generation solidified Star Trek as a sci-fi force, earning several Emmy’s, Hugo Awards and a Peabody award for Outstanding television programming, plus giving us one of the internet’s most-used memes. Together with the original series, TNG largely gave us the Star Trek we know today, an entertaining, but also inward looking series that wrestled with societal dilemmas ranging from emotion vs. reason to artificial intelligence, gender and even the ethics of meat.

Star Trek continued long after it’s original creative team departed, airing new shows on new networks, such as Deep Space 9, Voyager and Discovery, plus receiving a few feature length films. Toys, action figures and comics emerged, creating a true franchise for fans to enjoy. After the a dry spell in the mid-2000’s amidst more and more high-budget sci-fi competition, Star Trek received a shiny new reboot at the hands of venerable director J.J. Abrams in 2009, which was seen by many as both a fitting tribute to the ideas of the original and a way for the series to break into relevance once again. Beginning in 2017, Star Trek again joined television’s regularly scheduled programming under the moniker Discovery.

In modern sci-fi, it’s almost a give in that one day, humanity will discover light speed travel, join a federation of alien species and wrestle with the difficult ideas brought about by diversity, the vastness of space, dependence on technology, and our place among a vast universe. We owe many of these ideas to Roddenberry’s vision. For its staying power, influence and profound vision about humanity’s future, we’re glad to induct Star Trek as Franchise of the Year.