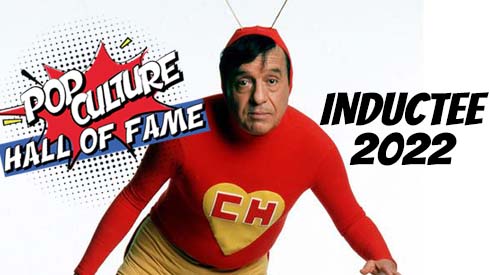 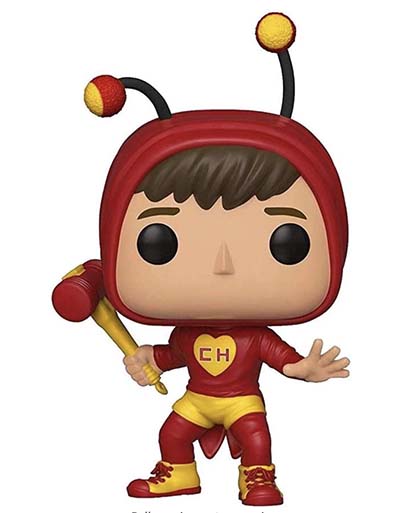 Anyone who thinks superheroes have gotten a little too serious lately should take a look back at El Chapulín Colorado. Beloved throughout the Latino world, this character needs no interpretation or introduction. But we’ll do it anyway: In English, he’s The Red Grasshopper or The Cherry Cricket. And his universal appeal makes him out latest Inductee to the Pop Culture Hall of Fame as a Character for 2022.

The show, starring creator Roberto Gómez Bolaños (aka Chespirito, or “Little Shakespeare”) ran from 1973 to 1981 on Mexican TV channels and over 100 other countries. The main character is known for being clumsy, oafish, and not very successful at saving the day. And, well, his costume could use some tailoring. Yes, Bolaños’ nickname was Little Shakespeare.  It was tongue in cheek, as Chespirito had been a vastly popular, fairly lowbrow comedian and actor for years. Then again, Shakespeare wrote some lowbrow comedy, so…

The show was a spoof on superhero TV shows of the day, many of which didn’t really have a much bigger budget than El Chapulín Colorado’s. That of course added to the charm. He certainly had his strong qualities:

El Chapulín Colorado also made his way into comic books, luckily sticking to the silly side of the superhero world. Think of Super Goof (which was around before his debut), The Tick (which came after), and other bumbling heroes but in Spanish. Matt Groening said his Bumblebee Man character on the Simpsons was directly influenced by one of those late-night random encounters on TV. Little known fun fact: Bumblebee Man’s name (the character who plays the character) is Pedro Chespirito. ¡Ay Caramba!

The Red Grasshopper even got his own metal lunchbox in the late ’70s. And a Funko Pop! figure more recently. And plenty of other merchandising in between. You could even get a copy of his famous squeak hammer, and it’s way lighter than Thor’s. In that vein, his staying power on TVs around the world is truly super. For that, El Chapulín Colorado stumbles into the Pop Culture Hall of Fame for 2022.