Robert Overstreet is of the biggest names in comics publishing, yet he has never written or drawn a comic story. Instead, he is the creator of The Overstreet Comic Book Price Guide, the most popular and authoritative bible of comics trading. For his contributions to the business, Overstreet is a 2021 inductee of the Pop Culture Hall of Fame as a Historian.

What’s this comic book worth? is the big question of the collecting industry. Buyers and sellers have wildly different opinions on any particular item based on which side of the equation they fall on. The Overstreet guides have proven to be a reliable and respected basis to begin such negotiations. 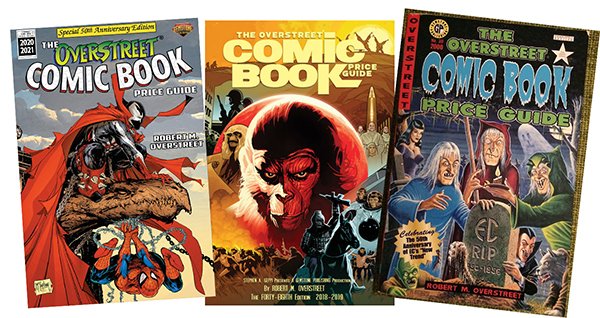 In the 1960s, Overstreet was an avid collector of coins, arrowheads, and, yes, comic books. Believe it or not, his first attempt at a price guide was for arrowheads. Since each arrowhead is unique, it’s hard to place a standard value on such an item, so the project never got off the ground. So he turned his attention to Golden Age and Silver Age comics and created his first guide in 1970. Items that are produced in specific quantities are a bit more welcoming to consistent pricing.

Comic book prices were less volatile at the time, so a printed guide should have served collectors well for at least a few years. Eventually, Overstreet began to include newer titles, which could instantly fluctuate from the original cover price to huge profits depending on the rarity. And as comics collecting became more of a business venture, the prices of older titles moved quite a bit as well.

So it made sense for Overstreet to begin publishing his guides more frequently. Early on, it was an annual guide, then every other month. Content was upgraded to include editorial content and news, making it more like a magazine. In the 1990s, there were multiple editions aimed specifically at comic retailers or at buyers.

Being the oldest guide in the field doesn’t guarantee success, of course. The fact that Overstreet has always been a fan first and collector next, and then a publisher ensures that the passion for the hobby will always be part of the content.

Ironically, older issues of Overstreet guides have become collectible in their own right, with hardcover copies going for big bucks. Newer editions even have multiple collector covers, driving up their value. Perhaps someone should create a price guide for these price guides. Oh, wait, that’s already covered in each new edition of the guides.

As one of the most successful and respected publishers in the comics industry, Robert Overstreet deserves a spot in the Pop Culture Hall of Fame.